I looked down into the blue waters of the Chesapeake Bay. Salt was in the air as the sub-aquatic vegetation pressed against the ceiling of the tide, almost yearning to escape the two feet of water still remaining in the bay. There was a bubble at the surface. As I turned my gaze from the horizon to the water, my mind soon processed the Spotted Sea Trout that had come so close to my kayak.

I took a few more seconds to contemplate my encounter with the fish. A few miles behind me was the mouth of the Susquehanna River. Beyond that was the Mason-Dixon line and Pennsylvania. Even further upstream was Harrisburg. And if you headed west somewhere around there, you would find the Conodoguinet Creek, the town of Carlisle, and Dickinson College. It was there that Alex and I began this tour just a few days before and maybe a hundred miles earlier.

The fish had disappeared; the ripples had dissipated. Any remnants of its presence were long gone. I once again returned my eyes to the land ahead. The fish was already at home safely in the undergrowth, yet we were still paddling our kayaks toward a place to make our home. Humidity masked the eastern shore as Alex and I were miles away from land in every direction. Only a faint breeze brought relief to the late afternoon heat as the sun continued it blazing journey to the west.

Rocks sat on a barge to my left; a small yacht was only a little farther. Two or three sailboats dotted the water ahead of us. It passed through my mind once or twice that they were probably wondering what two small human-powered vessels were doing out in the middle of the bay at that time. Our yellow and orange boats floated in contrast to the blue salt-water.

Picking up my paddle, I powered through my sore shoulders and the pain of the blisters forming on my hand. My sunburnt neck and face weren’t bothering me yet. I looked over at Alex and pulled my paddle through the water, propelling my kayak a few feet toward the land that never seemed to get any closer. Our short pause had come to an end. Although we joined the Spotted Sea Trout in his home for a couple minutes, we were still making the trip toward ours.

Maybe the Spotted Sea Trout would join us. 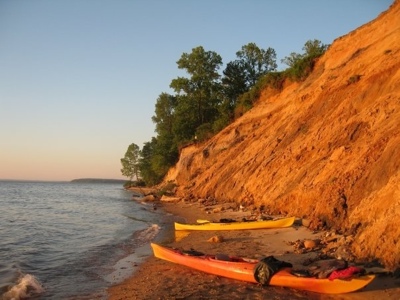